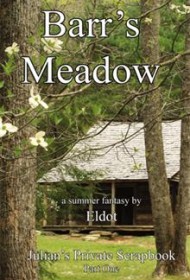 Pleasant, nostalgic and ingenuous, Barr’s Meadow is set at a Boy Scout camp in the early ‘60s, the fictional story of a gay young man named Julian.

Julian, nearly 13, is handsome, enthusiastic and affable, as well as a skilled artist. Julian has a crush on Scoutmaster Mark. Mark — who, while married, has been open to same-gender sex in the past — has resolved to confront this with sensitivity and fraternal affection, realizing that Julian’s trusting nature could make him the victim of more predatory scouts.

Author Eldot (who writes under one name) explores the daily activities of scout camp and the politics of sex between teenage boys. The author focuses mostly on the gay characters and Julian’s sexual thoughts, but this is not really gay erotica (although the back cover warns: “Not for sale to persons under 18”). With the exception of two somewhat explicit (though not heightened) passages, it reflects on same-gender, male sexuality while generally avoiding the salacious.

Eldot gets inside the heads of the characters, including Julian and Mark, as in: “Mark stepped around to the other side of the bed and watched Julian hustle. He bounced on his toes unconsciously. He had faced the unknown here and it had gone very well. I was right about this.”

Barr’s Meadow is comparable to other teenage boy coming-of-age narratives, such as The Last Picture Show, minus the cynicism, sophistication or relative depth. This doesn’t mean that it’s poorly crafted; only that Eldot’s prose is simple, direct and seeks to examine the lives and thoughts of guys who are only beginning to view the world with introspection. Eldot walks the precarious line between making the boys evolved and depicting them as saints. He allows them moments of tenderness and nurturing without suggesting their virility has been tainted.

Barr’s Meadow, the first in a series, never breaks through to the transcendent realms of literary brilliance, but it is intelligent, moving, well-grounded and memorable.