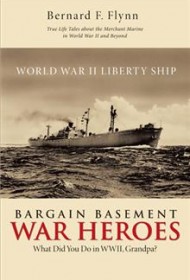 Two years after his 1940 graduation from high school in Boston, Flynn entered the Merchant Marine Academy in Kings Point, N.Y. His wartime service included numerous combat missions, and he left the Merchant Marine in 1947. Flynn, however, doesn’t focus on himself as much as the contributions the Merchant Marine made to the war effort. Although the Merchant Marine had the highest casualty rate of any branch of  service, the 200,000-plus people who served were treated shabbily by the government, in his view. They didn’t gain “veteran” status until 1988, and that only after years of litigation. They still don’t have full access to benefits, Flynn writes.

Such arguments comprise the crux of the book. Unfortunately, the author’s case is presented in a disorganized and repetitive manner. The same arguments, facts, charts and numbers appear numerous times (the comparative casualty rates appear at least a dozen times, for example).  And the focus of the text is further disrupted by Flynn’s Kennedy assassination theories.

In this regard, Flynn focuses on Abba Schwartz, Flynn’s bunkmate at Kings Point. Schwartz became a high-ranking state department official and was a confidant of John and Robert Kennedy. The author theorizes that Schwartz was a McCarthy-era leftist who transported nuclear material to the Soviet Union and helped Lee Harvey Oswald return home to the U.S.  His argument, however, is filled with inaccuracies (he notes, for example, that Schwartz was a Navy admiral and that “admirals” oversaw JFK’s autopsy. But according to published obituaries, Schwartz rose only to the rank of lieutenant, not admiral).

Such issues diminish the book’s overall effectiveness. Flynn’s family no doubt will appreciate the war stories included here, but the organization and extraneous material lessens its appeal to a wider reading audience.