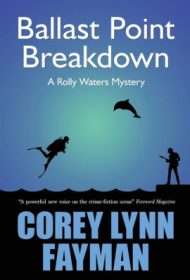 With his new mystery, Ballast Point Breakdown, author Corey Lynn Fayman spins a complex yarn concerning the training of dolphins for military use, an operation that has sparked the ire of environmental activists.

When Janis Withers literally crashes a party by driving a 20-foot speedboat through a picture window and then killing herself, guitarist Rolly Waters is on the scene, as his band is preforming in the San Diego Bay waterfront venue. But he soon takes up another gig, acting as private eye on a case that is deeply intertwined not just with the speedboat disaster but with a past Navy diving accident.

Withers’ last words are “Save the dolphins!” But she also says she has seen “Arion.” As Waters investigates, he learns that an ancient Greek tale tells of Arion, whose life was saved by a dolphin, but the name might be a code word for something far darker.

Memorable characters aplenty populate these pages, including Waters’ client, Melody Flowers, a good-looker who prides herself on reading auras; Janis Wither’s ice-cold mother, an animal behaviorist utterly lacking in human empathy; Waters’ father, Dean, a heavy drinker with an eye for the ladies and a loose tongue for comment on them; and an elusive musician known as Harmonica Dan.

Readers will also enjoy Waters’ use of musical thinking: “One note didn’t sound like much by itself. Now there were chords to go with it.”; “Working for the FBI sounded even more dangerous and uptempo.” There are other insightful moments, too, as when the musician sleuth reflects, “Bygones were excuses masquerading as reasons.“

Readers will need to persevere through seven final chapters of more conversation than action that detail nefarious misdeeds and “Freudian horrors” to finally resolve the plot. Fortunately, the action that does occur is memorable, and readers will hope for another Rolly Waters Mystery soon.