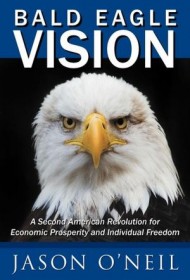 Depending on your political perspective, Jason O’Neil’s Bald Eagle Vision is either a Tea Party manifesto, a Libertarian treatise or a right-wing revolutionary tract. Sometimes it seems all three.

A Vietnam veteran and spacecraft and communications marketing executive, O’Neil has a clear sense of what’s wrong with America, and he’s determined to tell us about it. We’re lazy. Our education system is broken. We’ve overtaxed. We lack a work ethic. Social media is turning us into zombies. ( “With trillions of messages,” he writes of social media, “your generation goes electronic to pass the hurt of personal isolation.”)

Instead of the epistolary route, O’Neil frames his book as a wilderness outing with his grown daughter Erin, during which they alternately look for bald eagles in Alaska, and Pop gives Erin talks on how America has become a welfare state, addicted to confidence but lacking the skills needed to compete in the modern world. It’s hard to know if Erin is enjoying these talks or indulging the old man. She does little more than admire the wilderness scenery and provide verbal segues for O’Neil to elaborate further on his theories. And elaborate he does, often quite adroitly, but without a hint of compromise. Does he truly believe that everyone on welfare is trying to fleece the government? That the anemic American work ethic is like “a pesticide that can kill our future”?

Using the bald eagle as a metaphor for America’s majestic yet endangered existence, O’Neil preaches to the choir, namely those who are more Rush Limbaugh than Barack Obama. He calls for “collective action on a scale not seen since the American Revolution to change the direction of the Republic.”

You may not agree with his assumptions, but you can’t deny his passion.