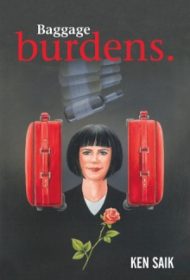 Jill, a divorced mother of four, is in a car accident. When no one else can be reached, she turns to her friend, Bill, to help with her children while she’s hospitalized. Following surgery, she’s in a medically-induced coma.

In this state, Jill sees her memories as if part of a play. She recalls her adolescence when she runs away from her abusive, alcoholic father and victimized mother. She further distances herself from her grandmother and friends as she relocates to a rural community in Alberta, Canada, to rebuild her life, and the narrative recounts her troubled past over a span of more than 20 years before coming full circle and returning to the present.

At nearly 700 pages, Baggage Burdens is daunting, it’s size unfortunately overshadowing the plot. In addition to its excessive length, point of view is an issue. The pretext of Jill’s story being told while in a state of unconsciousness is negated by the fact that those so-called memories include conversations and activities among characters that exclude Jill. The account is not entirely hers; much revolves around her husband, Joseph, and some around Bill.

Although mental illness is never explicitly stated, Jill’s behavior suggests otherwise. She is manipulative, paranoid and experiences extreme mood swings. She hears voices and her behavior is often erratic, particularly when it comes to Joseph. As such, she comes across as an unsympathetic character who always sees herself as a victim.

Saik’s work lends itself to be told as a series. Eliminating superfluous details, reducing the number of characters and incorporating a reliable narrator without the pretense of Jill recreating memories could have made this a gripping story about the efforts of family and close friends in a time of crisis. As it stands, readers may struggle to complete the tale.