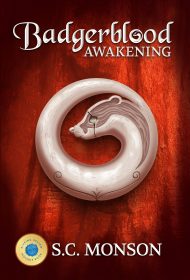 S.C. Monson’s Badgerblood: Awakening is a captivating fantasy tale in which the title implies several metaphors: the protagonist’s passage into manhood; his discovery of the larger universe around him; and his realization of the significance of his unique ability.

Monson skillfully builds a primitive land where an evil king rules and magic is real, but subtle and frowned upon. Magic powers are genetic and handed down in alternate generations.

At the beginning, young Kor, who has spent his life as a forest hermit, is faced with a difficult quandary: Should he risk his life to save a beautiful girl from a vicious bear-like borlan or follow the second of the two rules his mentor has emphasized all his life: “Don’t fight borlan”? No surprise, Kor follows his heart, and a ferocious battle ensues, one that shows the girl is not so helpless, herself.

Soon readers come to understand Kor’s true heritage, although Kor himself is initially unaware of it: He’s a royal heir and has inherited the ability to transform himself into either a borlan or badger. When he later endures battles, torture and imprisonment to regain his rightful heritage, he discovers that his animal-self possesses super strength and cleverness.

Meanwhile, it turns out that the girl, Allinor, is a princess who faces the possibility of a political marriage. While there’s an immediate attraction between Kor and Allinor, readers will have to wait for future books to see how it develops.

This is an utterly immersive reading experience. Monson’s world building is flawless, and she delivers characters that readers will care deeply about. Even minor characters are fleshed out and interesting. Although Awakening can be read as a stand-alone novel, it sets the scene for further adventures.

With its unique setting, strong characters and clever, integral use of magic, Awakening will remind readers of Terry Brooks’ Shannara saga. That’s heady praise, indeed, and those who venture into Monson’s world won’t be disappointed.