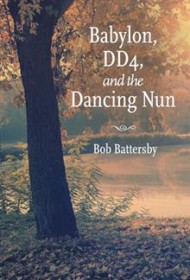 More nostalgic and less exotic than the title might imply, Babylon, DD4, and the Dancing Nun pays homage to boyhood in 1940s Long Island — specifically, Bob Battersby’s boyhood. Although the stories he shares here are not all strict autobiography, it’s Battersby’s quirky embellishments that add humor and charm to his tales.

Babylon covers the author’s growing up years, from childhood into early adulthood. It relates true and fictionalized events. (A preface notes that the book is “part folktales and part remembered events.”)

Babylon, for Battersby, is his New York hometown, where he played stickball, suffered through a friend’s first romance, and enjoyed Captain America serials at the movies. He paints the scenes lightly, in short chapters, but nonetheless captures the paradoxical innocence of childhood in wartime. Victory gardens, scrap metal collection, and even the advent of margarine are wonders to a young boy’s mind, and Battersby’s good-natured retelling captures that spirit.

Battersby explains in his preface that the characters in the first chapter are real, while later chapters contain some composite characters. Interestingly, those early passages, while evocative of time and place, sometimes fall a bit flat (”We had a cat when we lived in Babylon. His name was Pete.”). Battersby hits his comic stride about halfway through the narrative. By the time we’ve accompanied his friend HAG to the hermitage of his dreams, only to find him conversing with the local rodent population, the stories, although more outlandish, are quite entertaining. One wonders why Battersby didn’t choose to fictionalize the entire book, as that is clearly his strength.

Babylon, DD4, and the Dancing Nun offers a glimpse of an American childhood during WWII, and a humorous look at the perils of growing up after the war. Although Battersby could easily split this book in two volumes, separately developing the memoir and storytelling aspects, readers will learn a bit about American history and get a healthy laugh or two along the way.