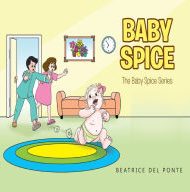 In Beatrice Del Ponte’s debut picture book, the first in a series, a restless baby is finally lulled to sleep by her grandmother.

Mamma Sugar and Papà Spice have a rambunctious baby daughter—aptly named Spice—who, night after night, refuses to go to bed. In one scene, Spice outruns Mamma, speeding across the floor with trails of dust behind her, a la the Roadrunner. Next, Spice is shown sitting in bed, but she’s wide awake, and looking up at her frazzled mother. Finally, Nonna comes to the rescue, arriving at the door dressed in pajamas and bunny slippers. As Nonna begins to sing to baby Spice in Italian, the baby crawls onto her lap and at last falls asleep in her arms.

While this has the makings of a sweet story, the book is unfortunately marred by grammatical errors: missing punctuation marks and an incomplete sentence.  Additionally, the read is a bumpy one. Initially, Del Ponte sets up a rhyme scheme (“Mamma Sugar and Papà Spice had/ a baby full of sugar and spice/…Who refused to sleep night after/ night, which wasn’t very nice.”) The rhythm is irregular, and soon, she abandons the idea of rhyming and simply begins to end each sentence with “spice.” The Italian phrase that Nonna sings to comfort Baby Spice isn’t translated, which leaves readers guessing: What were the magical words?

Although colorful, the illustrations look like clip art. In addition, there are problems with proportion: Mamma and Papà sometimes appear oddly smaller than the baby. And in one scene, Nonna looks inordinately tall as her head nearly touches the door frame.

There are many fine picture books about getting obstreperous children to sleep. Because of its above-stated flaws, Del Ponte’s book will likely have a hard time competing.