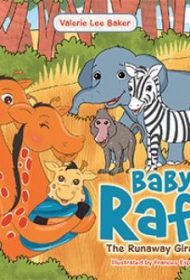 A young giraffe strays from his family, facing danger and uncertainty before finally reuniting with them, in Valerie Lee Baker’s picture book Baby Rafi: The Runaway Giraffe.

Giraffes George and Grace are excited at the birth of their first child, Rafi. As Rafi grows, though, they warn him not to leave the safe boundaries they’ve established. But Rafi, eager to find acacia leaves low enough to sample, hurts his leg and wanders past the safe boundary.

Lost and injured, Rafi’s concerns about predators are soon forgotten when a raging fire forces him to hop away and cross a river. He’s caught by a human and taken to a giraffe rescue compound. Soon, Rafi hears about a little girl stuck in a hole, and he manages to sneak out from the compound to help rescue her with his long neck. Weeks later, Rafi is moved from the rescue compound to a zoo, where, to his joy, his family awaits.

The book effectively demonstrates the reasons for parental rules (although Rafi’s heroism with the little girl muddies the message, as something good has come of his disobedience). The story is suspenseful, with unexpected twists to hold readers’ interest, but the sudden reappearance of Rafi’s family at the zoo seems rushed, and his quick acceptance of the zoo as his permanent home instead of returning to the wild might feel unsatisfying for some readers.

The writing contains strong imagery and some excellent use of language, particularly descriptions of nature, such as the “rhythmic echoing of the birds.” However, there are misspellings (“tuff” for “tuft”; “depts” for “depths”) and punctuation errors. Finally, the dense text (every other page features a full page of text) is more suited for chapter book readers than a picture book audience.

With brightly colored art that nicely complements the text, the book might appeal to some older children. But further polish and a better understanding of the story’s target audience would increase its readership.