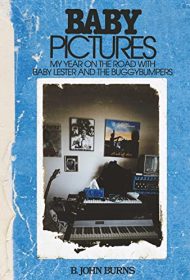 B. John Burns takes readers on a joyful nostalgia trip to 1976 with this account of his memorable year in a struggling Omaha, Nebraska-based band. This memoir conveys a transformational period in his young life, when gas was cheap and Fleetwood Mac’s Rumours was in heavy rotation on the car’s AM radio.

Burns’s Top 40 rock band played numerous Holiday Inn lounges in the Midwest, never knowing where their next gig would be or for how long. Its founder, Lester, aka Baby Lester, not only sang but also told “lewd underwear jokes” and imitated Elvis. He hired Burns, a friend of a friend and an aimless recent college dropout living in his parents’ Des Moines basement, to play keyboards. This was despite Burns’s self-described “questionable talent.”

Burns (whom we learn in the last chapter is a retired public defender) evocatively describes the naïve thrill of performing on the road as a 20-year-old with dreams of making it big. Though a teetotaler, he recalls that seeing audiences transfixed by the band was “more potent than heroin.” Burns’s storytelling is solid, featuring engaging, relatable characters, such as Lester’s wife Donna, the band’s raven-haired bass player. The author compellingly conveys the time-period.

However, too much of the book consists of Burns’s descriptions of driving (and repairing) his Buick LeSabre, hanging out in cheap motels, and writing music that he acknowledges was “primitive, uncommercial and unappealing” (adding “But it made me feel good”). Many of these on-the-road stories are repetitive and uneventful. Beautifully laid lead-ups fail to result in interesting climaxes, as in one extended story about getting stuck on I-90 during a South Dakota snowstorm. The outcome was happy, with no consequences from missing a gig— good luck for the band but less interesting for readers.

Burns has documented the adventure of his lifetime with great thought and care. But most readers will find that the book needs some paring down to hold their interest.