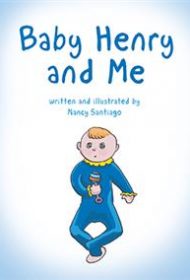 It’s natural for children to feel jealous when a new baby comes into a family. Nancy Santiago seeks to minimize that jealousy with her picture book Baby Henry and Me, a story meant to show what babies do and contrast their behavior with that of older children.

Infant Henry is described through the eyes of his older sister as he is breast-fed, burped and diapered, crosses his eyes, and cries. When Henry is finally put down for his nap, it’s his sister’s time to shine as she sits alone with her mother: “She reads my favorite story; and then we have a talk/ I show her how I tie my shoe…/ and tell time from a clock.”

Santiago’s goal is to send the message that babies only garner so much attention because they can’t do the things older children can do. This should help to instill a feeling of pride and independence in older siblings as well as a recognition that they, too, were once like Henry. To her credit, Santiago’s nameless narrator never makes fun of her baby brother’s inadequacies; she simply points out that she’s older and doesn’t need such assistance anymore.

Santiago tells the tale in a casual, rhyming cadence, using simple vocabulary featuring the repeated phrase “I’m not a baby anymore./ My mommy told me so.” The book ends with the girl happily announcing, “But, I’m no baby anymore…/ I guess by now you know!”

Santiago’s illustrations aren’t sophisticated – the hospital where Henry was born looks like a box with windows – but they do the job of helping the story along and have a simple charm. Parents should be advised that there’s an illustration of Henry’s mother breast-feeding him, which, while tastefully done, might not seem appropriate to every parent.

Overall, Baby Henry and Me should prove entertaining for any young reader, but especially those with a sibling who has recently arrived or is on the way.