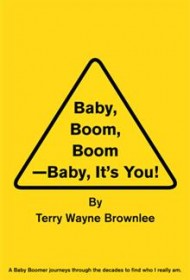 Terry Wayne Brownlee set out to write a book about the impact of advertising and popular culture on consumption among baby boomers. He also wanted to write a memoir — and publish a collection of photographs. With Baby, Boom, Boom — Baby, It’s You!, he has done a little bit of each of those things. The resulting book is often confusing, but never dull.

Brownlee’s scattershot approach leads to chapters summing up the 1950’s, 60’s and so on, but each establishes a premise that doesn’t continue in later chapters. A list of “happenings in the news,” for example, spans three pages in the 60’s section, but there’s none in the 50’s. The 1970’s features 11 pages of photographs, while the other chapters include only one to four. Brownlee lists pop culture phenomena particular to a decade, but adds that they may not actually be from that decade; it’s just when he remembers first hearing about, say, rap music. The ways in which baby boomers and consumption tie together never really enters the discussion, though at a few points he says he’ll be getting to it shortly…but then the book ends.

The writing is a bit frantic. “My friend, who I starred in his movies, moved down to Hollywood to chase his dream! I remember so well; he said to himself that he had no choice. I had to do it! I don’t think I told you, I have a lifelong speech problem.” It’s easy to find yourself confused and lost in the middle of these paragraphs, coming as they do between photos and top ten lists of electronic gadgets, pop songs from 2001, and other ephemera.

Baby is often rough going, but what consistently comes through is Brownlee’s joy in living and in following his curiosity where it leads. This book doesn’t have a lot to offer general interest readers, but it will make a lovely keepsake for family and friends.