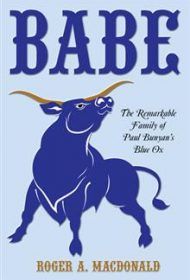 This entertaining historical fantasy combines the social traumas of late 19th-century America with the legend of Babe the Blue Ox, the heroic bovine giant who is always linked to logger Paul Bunyan in Midwestern folklore.

As author Roger A. MacDonald has it, Babe is an exceptionally sentient beast (he communicates in snorted Morse Code and knows words like “chimera”) who drops out of a tornado-ravaged sky onto the ruined Texas farm of a widowed schoolmarm named Sarah McAllfry. Sarah has an improvised family—including a former slave named Florenda Jackson and Florenda’s bright, curious nine-year-old, Henry—which is besieged by local Klansmen. So, soon after Babe materializes, the quartet migrates north to make new lives in the iron mines and logging camps of Minnesota. En route, they pick up two more key companions: a burly, part-Ojibwe lumberjack called Jock McPherson, and a full-Ojibwe wise man, Ashawa Deerhorn.

This is an inspirational tale about frontier pluck, family ties and tolerance that should have special appeal for teens and young adult readers. It’s a bouyant story, full of optimism about human endurance and animal loyalty.

There are some rough spots. MacDonald’s well-meaning take on period black dialect (“Dat ain’t no school fer us Nigras”; “Yassum, teach lady”) can be paternalistic and offensive. He stretches Babe’s anthropomorphic gifts to the breaking point, asking us to see the ox as a two-horned philosopher of sorts. And the writing can be saccharin, describing lumberjacks as “unlettered, humble woodsmen” whose silence is “as eloquent as any paean.”

On the other hand, scenes like MacDonald’s description of a dangerous logjam on a frozen river make for thrilling setpieces, and his characters’ sundry triumphs—happy marriages, settled lives, medical school for brilliant Henry, a budding brotherhood with Paul Bunyan for Babe—provide ongoing satisfactions in a novel steeped in some vivid Minnesota history and mythology.