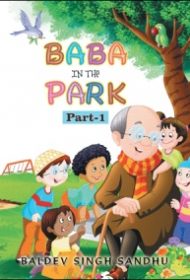 In Baldev Singh Sandu’s picture book, a conversation about bullying is sparked when an elderly man strolls through a park and is heartened to see a group of children playing peacefully together.

While “Baba” is taking a walk, he sings a song about love and respect: “Everybody love [sic] everybody/ Everybody is somebody/ Everybody hate [sic] nobody/ Everybody [sic] bullying nobody.” A group of children hear him and gather around.

Armit, an admitted former bully, explains how he learned the lesson articulated in Baba’s song: His teacher showed him a garden and pointed out the variations in the flowers. “…They all come in different shapes, sizes, and colors…And look at the gardener; he is treating them all the same.”

After hearing Amit’s story, the children ask Baba for an encore of his song, and he obliges by singing several variations of the composition. An illustration shows four historical figures of different ethnic origins (including Abraham Lincoln and Martin Luther King, Jr.) with the caption: “Everybody be somebody!” Finally, Baba announces an impending world trip, telling the children he would “probably” see them next year.

While the illustrations are colorful—and there’s a certain charm in Baba, with his friendly smile, heavy overcoat, striped scarf and cane—many will find it hard to read to book’s end. Revision is required before this story can appeal to a young audience.