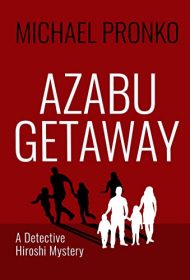 Azabu Getaway opens with protagonist Patrick Walsh, an American investment banker, breaking into his Tokyo condominium to take his young daughters while his wife, who is divorcing him, is working. He’s a not-too-likable main character who’s botching his attempt to move his daughters to Wyoming, where he’s been working for nine months.

Then the story abruptly shifts to the high-rise office of Nine Dragons Wealth Management, where a manager discovers his boss murdered. The two plotlines seem jarringly unconnected, until it’s revealed that Patrick works for Nine Dragons, moving clients’ money in and out of shell companies in Wyoming, which has the U.S.’s most open laws for such financial fiddling.

Detective Hiroshi, who prefers desk work, is tasked with investigating the murder because the manager who found the victim doesn’t speak Japanese, and Hiroshi, educated in the U.S., speaks English.

It takes time for the two narratives – the kidnapping and murder – to merge, and readers may become impatient for things to coalesce. Their connection is finally uncovered by Hiroshi and his team of cops about a third of the way through the novel. By the time the story reveals its shockingly public (for Japan) and violent climax, readers will be racing through pages as breathlessly as the police, and will come to appreciate Patrick Walsh’s actions in the book’s beginning.

Pronko, who’s lived in Japan for 20 years and teaches American culture and literature at a Tokyo university, skillfully inserts scenes into every novel revealing the ways Japanese live – and how they can differ from American culture. He also describes in tantalizing detail the nightlife and food and drink Japanese enjoy, including cops when they gather after work.

Azabu Getaway is no exception. Pronko serves up another satisfying crime thriller that vividly showcases Japan at the same time.