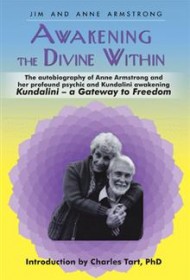 Former engineer and chemist Jim Armstrong tells about how he and his wife, Anne, came to run spiritual new age workshops all over the country. After being plagued with illness, Anne discovered through hypnosis that she had special abilities. And Jim, after exploring a multitude of careers, decided that his place in the world was supporting Anne to help others become more intuitive.

Awakening the Divine Within is divided into nine chapters. The first four are dedicated to the back-story of the compelling couple. Jim discusses how he met Anne, their family histories, and how Anne came to have a Kundalini awakening (where the energy in her body comes forth into the world), and discovered her intuitive powers. The next five chapters alternate between transcriptions of Anne’s counseling of workshop participants and a how-to guide on becoming more intuitive.

The book is written from Jim’s perspective. Even though Anne is the co-author and main character, she remains a mystery. The reader knows Jim’s thoughts and motivations, but is completely left in the dark when it comes to Anne’s internal conflicts and musings. It is undisputable that the Armstrongs have lived interesting and colorful lives, but Jim gives so many unrelated details that the book lacks flow. For example, when writing about how Anne began running workshops, Jim offers a 100-year history about the Esalen Institute.

Later in the book, Jim and Anne share some useful spiritual tips and explanations of Buddhist principals. There is also a succinct guide on how to do sitting meditations. Many of the techniques outlined could raise a person’s awareness and lead to growth, but it’s questionable that they will lead to heightened psychic abilities, as is suggested.

There are many interesting and challenging nuggets in this book, but the extraneous information and lack of personal connection to Anne ultimately hinder the reading experience, making it hard for readers to relate to the material in a meaningful way.