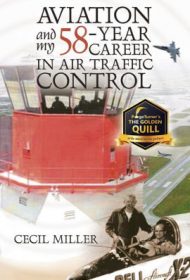 Aviation offers Cecil Miller’s detailed memoir of his work as an air traffic controller, both in the U.S. Air Force and for the Federal Aviation Agency.

Miller opens with quick sketches of aviation’s history, noting that early airmail pilots relied on giant concrete arrows embedded in the earth to navigate the West’s open spaces. He goes on to discuss his career, which began after he enlisted in the Air Force soon after graduating high school. When Miller told an Air Force career counselor he didn’t like public speaking, the counselor suggested he look into air traffic control because: “You talk to the pilots over a radio, but you don’t see them.”

Aviation buffs will appreciate Miller’s recounting of his time at Edwards Air Force Base, where heroes like Chuck Yeager and Scott Crossfield acted as test pilots. Miller was at Edwards when aircraft began to cross the sound barrier in level flight and other records were set in rocket-powered X-planes and experimental ride-‘em-cowboy jets.

The author notes that at a time when many experts thought flying faster than sound would cause an aircraft to break apart, a civilian test pilot, Chalmers “Slick” Goodlin, demanded $150,000 to make the flight. But Yeager, then a young WWII veteran, volunteered to fly the Bell X-1 to break the sound barrier.

Miller’s writing is straightforward and unadorned, reportage rather than analysis. It’s marred by unnecessary repetitions. Additionally, there’s little self-reflection. For example, his son followed his path, only to be fired during the Reagan Administration’s massive purge of striking air traffic controllers. Miller shows only mild resentment toward Reagan’s union-busting tactics.

The memoir is littered with acronyms, particularly the complex latter section about aviation’s future, which contains many technical references that may overwhelm general readers.

Overall, casual aviation buffs may enjoy stories from Miller’s early days at Edwards, but the book seems most likely to appeal to those considering an aviation career.