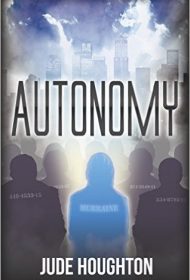 Equal parts post-apocalyptic and dystopian fiction, Jude Houghton’s mind-blowing epic tale of humankind’s struggle to survive in a critically overpopulated world stripped of all its resources is nothing short of a science fiction masterwork.

The story is set in the very near future, a decade after a global environmental collapse has pushed humankind to the brink of extinction. Humanity has responded by creating the Autonomy, essentially a world corporation ruled by an elite group of economists that takes ruthless advantage of the planet’s sole remaining resource: the starving masses. “Everything has a cost. We used to rape Earth’s resources. Now that there are none left, we rape our own.”

Chronicled from a diversity of perspectives—from the disadvantaged daughter of overworked and undernourished parents living a nightmare existence in an industrial sector to the affluent stepsons of the chair of the group that runs the Autonomy—the story follows the rising dissension of rebels who want to overthrow the ruthless regime that has dehumanized and disenfranchised millions.

The novel can easily be recommended for Houghton’s meticulously described description of the near-future alone, but there are numerous other aspects that make this story noteworthy. The author manages to integrate a complicated (and believable) backstory into the plot without slowing narrative momentum. Additionally, intimate and emotionally intense character threads power the ambitious, overarching story arc. For example, the story of Tristram Eborgersen—whose father was assassinated by rebels—is a heartrending journey of self-discovery. The exploration of weighty themes—including humankind’s blind faith in technology as well as organized religion—make this a novel readers won’t soon forget.

In the introduction of the 2006 reissue of Walter M. Miller, Jr.’s 1959 post-apocalyptic classic A Canticle for Leibowitz, author Mary Doria Russell described it as “a novel that will change all those who read it.” The same can be said for Houghton’s latest; it’s everything a science fiction novel should be—relentlessly entertaining and thematically profound.