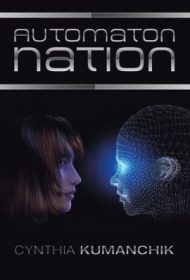 Meat shortages, protests, swat teams in battle gear, climate change, revolution. Cynthia Kumanchik could be recounting 2020 newspaper headlines from across America. Instead, her YA novel pits technological progress against humanity in the futuristic Capitol City (once Sacramento) circa 2045.

On the evening of the scientific corporation Robot International’s (RI) Gala, Dat, a Model-500 “human-like android,” is poised on the edge of a lifelong dream: to be head chef for the Grand Old Capitol Hotel. After all, his brain donor was his mentor, the world-renowned chef Tony De LaFleur.

But when the festive evening goes disastrously wrong, Dat finds himself thrust alongside Val, the human daughter of the creator of the Model-500’s Genealogy Project. As the two become friends, they discover the fallacies of their preconceived notions of each other. Eventually, they join rebel robots fighting RI, who seek equal rights and are willing to die for them. Says one: “Hey, not all of us are treated well . . . working us twenty-four hours a day and mocked as second-class citizens. Look at me – beaten by my guard.” He shows them his missing hand, wires protruding, and a missing eye socket.

As Dat and Val fight for a more just city and against the forbidden feelings growing between them, readers will root for the characters. But are they fighting to protect humanity from robots? Or the other way around?

Kumanchik’s novel kicks off like lightning and doesn’t let go until the satisfying conclusion. Her writing is taut and crisp, and her descriptions of the androids and 2045-technology is riveting: “Their self-driving space van whisked them away and cruised above the rooftops of the 1,000-foot lightweight 3D-printed carbon graphene buildings and the unique 500-foot Grand Old Capitol Hotel, a historic landmark built of self-healing concrete.”

With an intriguing cover design, plenty of fast-paced action and a touch of romance, Automaton Nation is certain to please YA science-fiction fans, particularly those who enjoyed The Hunger Games.