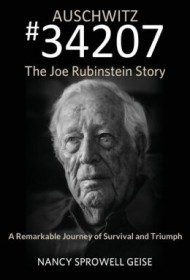 The nightmare began with a knock at the door. Icek “Joe” Rubinsztejn, a 21-year-old Polish Jew, hurried to open it, not wanting his sleeping family disturbed. The two German soldiers took him barefoot in his pajamas into the 33-degree night. He spent the next three years in Nazi death camps. Auschwitz #34207 tells the story of how he survived.

Although the broad strokes are familiar – ordinary lives upended, neighbors turning on neighbors, acts of unspeakable cruelty – the particulars are no less harrowing: piling corpses into mass graves, clearing snow and ice with bare hands, enduring 25 lashes from a whip made more lethal by a jumble of wire.

Auschwitz #34207 follows Rubinstein from childhood to old age, from Poland to America, and from barefoot prisoner of war to successful designer of high-end women’s footwear, a career that began in an apprenticeship before the war. His story is told in the first person, not by him but by the author, whose extensive research fleshed out the account he provided in face-to-face interviews. The resulting narration is both vivid and authentic, balancing the immediacy of his ordeal with the values that helped him survive it, imparted during a childhood that ended too soon.

The last third of the book is taken up by chapter notes, a timeline, glossary, discussion questions, and an odd collection of Rubinstein’s quotes that strike a discordant note compared with the author’s polished prose. The unusual presentation doesn’t detract, however, from the main portion of the book. The volume also includes disturbing photos of the dead, and of the long lines of men, women, and children soon to join them, walking — unbeknownst to them — to the gas chambers.

The ranks of the witnesses to these and other atrocities are thinning. In sharing his story – with Nancy Sprowell Geise’s help – Rubinstein has made an invaluable contribution to the literature of the Holocaust.