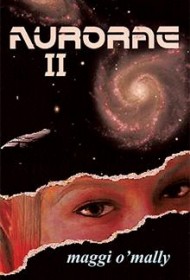 Aurorae II is the second installment in author Maggi O’Mally’s Aurorae saga— futuristic erotica that revolves around the incendiary sexual relationship between starship captain Tomas “T.M.” Muscovich and his second-in-command, a female from an alien feline race named Mowsra “Mouse” Sriza. It carries a much darker overtone than the first.

In the first novel, the science fiction elements were an obvious focus, but in the sequel, the exploratory mission of the starship Aurorae—and the ultimate fate of humankind—takes a backseat to Muscovich and Sriza’s sexual exploration of each other. The amount of significant science fiction in this novel is markedly less than in the first volume. In fact, the saga’s narrative foundation (regarding humankind’s war against an invading alien race) is barely even referenced, to the story’s detriment.

The book also suffers from the escalation of sexual deviance between the two main characters. In the first novel, the sex scenes were brilliantly described; the romanticism and carnality were perfectly blended, the sex sequences extraordinarily effective. Writing good erotica is incredibly difficult. Flowery or overly emotional prose can turn a steamy scene into a comedic one. Describing a sex scene in graphic, play-by-play detail could easily disgust readers. As evidenced by the series’ first novel, O’Mally obviously knows how to write erotica. The question is whether the series’ fans will enjoy where the relationship between the two characters is headed.

Consider this Fifty Shades of Grey in space.