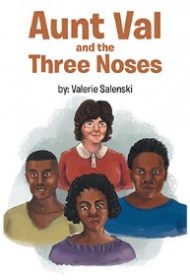 Aunt Val and the Three Noses presents three linked original fairy tales that include kings, knights, and underdogs who come into their own by solving problems.

The book begins with Aunt Val seated on a couch surrounded by her eight nieces and nephews. When they beg for a story and one nephew sneezes three times, she decides to make up a tale about three noses.

This is followed by loosely linked tales of siblings Sneezee, Smella, and Snorty, who have huge noses. With their noses come particular talents: Sneezee has a powerful sneeze, which helps him interrupt a giant ransacking a village; Smella has an acute sense of smell, which helps her find a job as the royal perfumer; and Snorty snorts loudly, which helps him guide a group of fishermen through a thick fog. The book presents each of these stories in quick succession with minimal illustrations, all to convey a key moral, noted on the back cover as: “the very things that make us different…also make us special.”

The book presents the stories with workmanlike prose and an accessible vocabulary. Unfortunately, paragraph breaks (particularly for dialogue) don’t conform to standard rules, making conversations and ideas difficult to follow. The three siblings are unequivocal heroes who are kind to those they meet and clever problem solvers. Their stories have clear stakes, unique constructs, and positive endings that children will easily relate to.

That said, the premise that their powers come from their noses is problematic. The siblings are depicted as black and are drawn with abnormally large noses, reinforcing the stereotype of African Americans and Africans having broad noses. This physical attribute carries a history of ridicule and misinformation; thus, rather than being empowering, it feels exploitative and may make some readers uncomfortable.