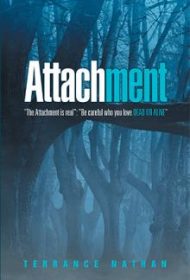 Attachment, a screenplay written by Terrance Nathan, is a tale of cinematic obsession with horrifying consequences.

New York City copy-editor Jade Weary becomes increasingly preoccupied with deceased classic film star Joan Cassidy. He invests in her memorabilia, which enables her ghost to appear in his apartment.  The actress reveals herself on a projection screen, and a “spooky phonograph” projects her voice. Simultaneously, Jade develops a relationship with waitress and aspiring writer, Rain.

Nathan slowly reveals Cassidy’s backstory, which involves the murder of her lover and her uncanny “bond” to Jade’s apartment. Her malevolence becomes clear when her ghost sexually assaults Jade. To escape her malign influence, Jade and Rain flee the city, but Joan pursues them with devastating consequences.

Jade and Rain are endearing characters.  Unfortunately, the audience learns only snippets of their histories, which detracts from their effectiveness and creates confusion. Jade’s childhood (his homeschooling and his mother’s mental illness, for example) are fleetingly addressed and do not explain his susceptibility to Joan’s supernatural onslaught, especially when considered in relation to his seemingly successful NYC career. Rain alludes to her own history of trauma, but Nathan omits the details, which would have increased her character’s depth.

Other elements of the story lack elaboration.  For example, why are coyotes running through the streets of New York?

Nathan’s work also has structural problems. Theoretically, it is reasonable to write this story as a screenplay, as it involves the fantasies associated with the cinematic experience.  However, the constant shifts in scene can be disconcerting. Interior descriptions have a frustrating lack of detail. Readers will struggle to engage with pivotal scenes, which are difficult to imagine without further explanation.

The author has created the potential for an intriguing story. To increase its appeal, more attention to the psychology of the characters and scene development is required.