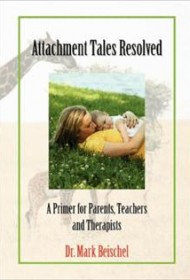 There are few things as troubling – and at times terrifying – as the bottomless rage, violence, and complete lack of remorse that accompany young children who suffer from attachment disorders. Whether from abuse or neglect, these children failed to properly attach as infants to their mother or caregiver. The damage is profound, as even the youngest of children cope and self-soothe with escalating destructive behaviors, both to themselves and all around them.

Mark Beischel, a PhD in psychology specializing in child neglect and abuse, has attempted to unlock the mysteries of these children in this slim volume. As both an expert and an adoptive parent of three troubled children, he knows well of the frustrations and confusion that comes with trying to raise – and love – a child with an attachment disorder. Because these children do not behave in expected, or even logical ways, the usual parental reactions such as getting angry, yelling, or punishing do not work.

Told simply, Beischel intertwines brain science and child psychology with short vignettes of actual cases. But while Beischel lays out various scenarios, he then skirts the most fundamental question his readers are likely to have: Now what? For example, he writes of a 12-year-old girl who craves constant attention and stabs her teacher when she turns away to help another student. Beischel notes that the consequences were “devastating,” but he never explains what happened next. Similarly, he describes how parents react badly to their children’s lying and stealing but doesn’t offer enough concrete advice on what to do instead.

He is strongest when describing his own experiences and how, even as a trained professional, he once became so enraged at his son that he nearly became violent. While his book would have been better had it delivered more useful advice, perhaps its real strength will be enough for readers facing similar situations: simply to let them know they are not alone.