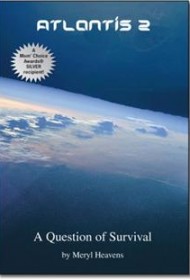 This ambitious debut novel from Meryl Heavens — the first installment of a projected series — is a science fiction adventure that fuses post-apocalyptic fiction and space opera in a storyline involving humankind rising from the ashes of its own destruction, manipulative alien overlords, an unlikely love story, and a transcendent awakening in which the people of the “New World” finally realize their destined place in the universe.

Almost 500 years after the human world was destroyed by an “ecological cataclysm,” the descendants of those who had the forethought to build an underground refuge in Siberia have survived to see an Earth largely restored. And it’s not just the planet that has healed itself; humankind has built a new society that nurtures spirituality, unselfishness, and peace.

The anti-isolationist leaders of this new world, called Atlantis 2, are trying to prove themselves to the space-faring, alien races of the Galactic Coalition, but they have only been met with distrust and contempt. Princess Nya Pavlovsky finds the aliens’ continued hostility suspicious, and when the humans are attacked for no reason, she realizes that the Coalition doesn’t want to help humankind; they want to exploit and quite possibly destroy them. Physical and mental abilities that she never had before begin appearing and she understands what she must do: “We are pacifists… but we will defend our right to exist with every means necessary.”

Although this novel is powered by an impressively complex and undeniably engaging storyline, minor flaws throughout make it a less-than-stellar read. The apocalyptic backstory involving the widespread use of a new fuel is absolutely fascinating but barely touched upon; the New Age philosophy, again, is only superficially explored, and the conclusion is anti-climactic and seems more like a respite than an ending.

But even with these missteps, Heavens has created an entertaining and optimistic vision of humankind that is ripe for further speculation.