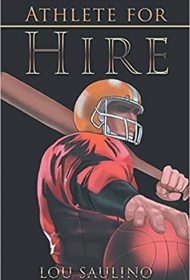 In Athlete for Hire, the protagonist isn’t just an incredibly talented athlete, he has superstar potential in all three of America’s most popular professional sports: football, baseball, and basketball.

Conventional wisdom—and the wear and tear of the sports—suggests that that no one could actually play in three pro leagues. But Scott Thomas, owner of Atlanta-based NFL, MLB and NBA teams, has no interest in conventional wisdom. In Marc Stevens, he sees an incredible marketing opportunity: an “athlete for hire,” who can bounce as needed among Thomas’s three franchises, generating a groundswell of excitement among all their fan bases.

While the setup suggests the story would illustrate Stevens’s unique challenge in rotating among three professional sports, that part just gets rolling in the novel’s concluding pages. Instead, the narrative largely focuses on Thomas’s wheeling and dealing in trying to put his unprecedented plan into action. Concurrently, the story follows Stevens through his final year of collegiate play, detailing his many successes and occasional setbacks in each sport, along with his personal relationships with his quarterback best friend, his girlfriend, and his football and basketball coaches.

Saulino’s writing lacks preciousness, which makes it endearing and accessible—if sometimes crude. This book won’t appeal to readers who enjoy an artful turn of phrase or lush scene-setting. The dialogue is frequently bawdy, the humor invariably lewd. Saulino notably names a drafted NBA player “Kisame Butts,” and one chapter is titled “Unf——ngbelievable,” which fits perfectly with the novel’s tone. It helps that the author is proficient in the nuances of each sport, grounding the athletic action in believable detail.

Those interested in a thoughtful, realistic analysis of this unique premise would best look elsewhere. However, those who enjoy vivid, blunt-spoken characters navigating the cutthroat world of sports will have a good time.

Athlete for Hire is a trifle, but it’s a scruffily charming trifle, rich with colorful characters and engaging action that likely will entertain sports fans.