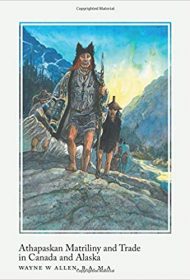 Athapaskan Matriliny and Trade in Canada and Alaska is Wayne W. Allen’s 1971 master’s thesis showing how Athapaskan-speaking descent groups of “Alaska and the western sub-arctic of Canada” may have become matrilineal through trading connections with the Tlingit (matrilineal tribe indigenous to the North American northwest coast).

The Tlingit, Allen indicates, were avaricious traders who would marry Athapaskan women “to secure greater advantages in trade.” The Tlingit groom, in keeping with Tlingit matrilineal custom, would often stay with the Athapaskan bride’s tribe. The groom would then serve as the Athapaskan trading partner with the Tlingits, giving the Tlingits a favorable trading relationship. “Each Tlingit trader,” Allen states, “had a trading partner among the Athapaskans, [sic] who was always a member of the same sib [a kinship group descended from a common ancestor] as the trader.”

To support his thesis, that, over time, this trade-engendered intermixing may have led the Athapaskan descent group to become matrilineal societies, Allen shows how the Athapaskan tribes along the five Tlingit trade routes (“the Stikine River, the Taku River, the Chilkoot Pass, the Chilkat Pass, and Dry Bay”) picked up additional Tlingit customs, such as a social structure based on wealth, a penchant for intense, greedy bargaining, and the holding of potlaches.

Allen derives most of his information from secondary sources, and his text, except for a few charming illustrations and evocative sentences (The Yukon River Indians “danced forward until they were in front of Murray’s tent.”), is dry and academic. Portions are necessarily given over to technical discussions concerning topics like the difference between “sibs, clans, moieties and phratries” and whether a particular band meets the qualifications for matrilocal residence. Immediate, sensory descriptions, like what it would be like to trudge up and over the Chilkoot pass with a pack of trade goods, are wholly missing.

As such, this book is unlikely to appeal to general readers. It may, however, prove a valuable resource for researchers studying this subject.