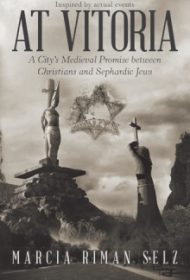 At Vitoria is a historical novel about the expulsion of Jewish families from Spain during the Spanish Inquisition and the Alhambra Decree with which Isabella and Ferdinand of Spain sought to make the country a purely Catholic nation.

A prologue, set in 1952, introduces a centuries-old promise made to Vitoria’s Jews to preserve their cemetery forever. The reason for this promise is revealed in the ensuing story, set in the 15th century and concerning the Crevago family, tight-knit Sephardic Jews that make luxury shoes. Vidal, the family salesman, travels the country selling shoes. When he sees the rising threat to Jews, he wants to move the family to Holland, but his brothers won’t agree, and the Crevagos endure tragedy, illness and emotional upheaval before facing up to the realities of the Inquisition.

The novel’s strength is in its descriptions of the traditions and daily living of a medieval Jewish family. Telling details bring the past to life: the water clock by which Vidal’s sister times the cooking of matzo; the cutting of convicts’ hair so strands won’t fly around the crowd when prisoners are burned at the stake, and so on. This realism, however, becomes problematic with two graphic rape scenes (one of a teenage girl, the other of a man), as it’s unclear what they add to the story’s narrative arc.

Additionally, Vidal appears to be the novel’s main character, but after the first five chapters, the point of view widens to feature others, including, on two occasions, King Ferdinand and Queen Isabella. The large cast diffuses the story’s emotional impact, as do varying leaps of time between chapters. (Two significant family members, for example, are active and alive at one chapter’s conclusion, but within a page of the next chapter, readers learn both have died.)

Such flaws lessen the narrative’s effectiveness. Nonetheless, At Vitoria should hold strong appeal to students of Jewish history and tradition.