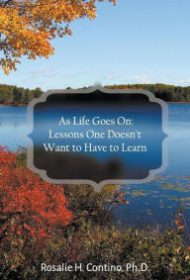 For much of his life, Robert Contino suffered. He had mental problems that caused odd behavior, emphysema, heart problems and other health issues, all exacerbated by a heavy smoking habit. His mobility was limited by a bad hip. And he was uncooperative with doctors. Things would have been even worse if not for his younger sister, Rosalie, who wrote this memoir about her life and efforts to care for him.

After their mother’s death, Rosalie assumed the care of her father and Robert. When their dad died, Rosalie became Robert’s champion, sharing an apartment, cooking his meals, fighting his battles and overseeing his medical care. This book took shape during the endless merry-go-round of trips to hospitals and doctors’ offices. She kept notes of everything, mostly to stave off boredom. “After Bob passed on, I started reading over the pages and pages of what I had jotted down,” she writes. “I felt the story should be told.”

Contino’s day job was as a teacher in the New York City schools, but she aspired to be a playwright and costume designer. She achieved those goals on a limited basis, working on a friend’s off-Broadway productions; her life was mostly consumed with caregiving duties.

Contino tells her story in a straightforward, somewhat pedestrian manner. The text includes occasional errors. (She writes that her father and Robert loved model trains, but “As Dad got older and was able to set up the trains, Bob lost interest too.” Clearly, she means that her father was unable to set up the trains.) At times, Robert’s medical travails and her battles with bureaucracies seem repetitious, but she makes it clear how the physical, mental and financial burdens of caretaking can be stifling. In the end, she survived by dint of her strong character.

As Life Goes On could use tighter editing, but anyone with aging or ailing family members could benefit from reading this story and will easily relate to Contino’s many challenges.