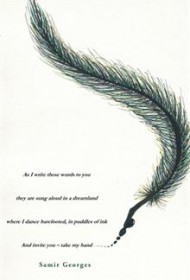 As I Write These Words to You is an intriguing debut by a promising, if unpolished, young poet. According to the back cover, Samir Georges began writing these poems when he was ten and completed them when he was 20. Despite the time span, the poems appear largely uniform from start to finish.

At nearly 250 pages, this book would have benefited from further editorial selectivity. Poetic clichÃ©s–knights, maidens, birds, suns, moons, horizons, etc.–are too frequently employed. However, Georges is capable of providing fresh imagery, as in his description of a tree branch that “spasms in the wind” in “To Live, Flightless Birds,” or these lines from “Glistening White”: “Throwing back the sunlight / in mouthfuls of white . . . ”

Weak, impersonal meditations on the generic condition of “mankind” are contrasted by strong poems about breaking from tradition, leaving home, and questioning authority–issues that gain resonance through the early placement of “Sand Castle,” which (along with the cover copy) references the poet’s move from Lebanon to Canada:

In solid poems such as “The Monster without Purpose,” Georges critiques world culture as promoting war and commerce while separating people from nature and community. Poems such as “Voices,” “Being,” and “Wonder Why” criticize the hypocrisy of organized religion and ask why evil exists alongside good. Smartly, Georges recognizes the balance implied by contraries and appreciates the state of no-knowledge–of satori, or wu-wei–as in “Alone We Are Resolute”: “…we feel joy / in the moment before release,…”

A thread of writing-about-writing includes the clever poem about writer’s block, “Words That Do Not Speak,” and culminates with the penultimate poem in which Georges thanks his readers for providing the embrace he cannot feel “at home.”