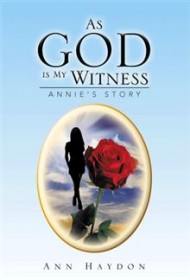 The legacy of child abuse is grim indeed, and often pays forward onto future generations. As God Is My Witness tells one woman’s harrowing story and how it later played out for her own children.

Author Ann Haydon opens with the traumatic return “home” after a stay in Child Protective Services and relocation to a loving foster family who wanted to adopt her but was thwarted by her birth parents. Mom beats her many kids (Haydon is one of 12) and is verbally abusive, and Dad is a pedophile who starts molesting Haydon when she’s five. Once Haydon grows up and leaves home, she struggles to believe her parents have changed, then learns they’ve visited the same torture on her own children. By the time her father is taken to court, 39 charges are laid at his feet, all of which he denies (thankfully, the judge sees things differently).

Haydon is unflinching about her parents’ reign of terror, and unsparing toward herself. It’s agonizing to see her fail to connect the dots about her own abuse and let her kids visit their grandparents, only to learn that the children had asked for the visits under the same threat of violence Haydon had suffered as a child.

While the story is generally easy to follow, misspelled and misused words cloud things occasionally, and it’s often difficult and frustrating to sort out exactly who is related to whom and how (Haydon learns that the father she grew up with is actually her stepfather, and it appears several of her siblings are foster kids.)

As God Is My Witness is Haydon’s attempt to make sense of her life thus far, and also to help prevent further child abuse. Despite its flaws, it may help others recognize the common patterns of abuse, and it may also offer some comfort to those who suffered similarly growing up, with the caveat that the book is explicit and disturbing.