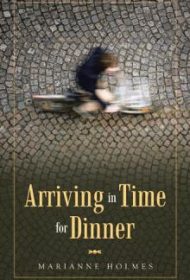 In Marianne Holmes’ thoughtful first novel, two very different people transform each other through the gifts of small kindnesses.

Arriving in Time for Dinner tells the story of Henry and Chiffon’s slowly evolving friendship. Henry lives a predictable, safe life of strict routine and timeliness, and his introverted nature borders on antisocial. His life is upended when Stan, the owner of the deli he visits twice a week, hires his distant cousin Chiffon as counter help.

Chiffon is the opposite of Henry—scattered, kind, and late to almost everything. She befriends him over the deli counter, despite, and perhaps even because of, his resistance and misgivings. Their friendship bolsters each other amidst the underlying sadness of their lives, and they come to depend on each other.

Their tale is told in chapters with alternating points of view, but the storytelling gets muddied as five minor characters also tell their stories, as related to Henry’s and Chiffon’s. Although equally poignant and interesting—especially the tale of Henry’s assistant Sylvia and how she leaves her emotionally abusive husband—they distract from the main story, and sometimes, it’s hard to tell if a chapter is being told from one of the two main characters’ or a minor character’s point of view. Clearly labeling the chapters to indicate who is narrating would resolve this confusion.

Holmes’s strength is her ability to reveal the beauty and even transcendent power of such ordinary—and very sad—characters without becoming sentimental. Sometimes, however, readers may wish she had let the action speak for itself, rather than reiterating ideas through passive description; for example, Henry is described repeatedly as “predictable,” even though his actions reveal this characteristic well. Also, at one point, Chiffon delivers a one-and-a-half page soliloquy about her bouts with depression when a shorter conversation would have sufficed.

Still, despite such flaws, this novel has many lovely moments, and the characters will stick with readers long after the last page.