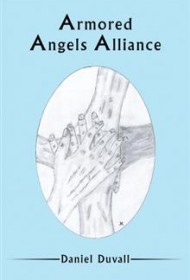 The vibrant core of Daniel Duvall’s novel, Armored Angels Alliance, is his commitment to sharing the gospel and its impact on even the roughest souls. From the beginning, he draws the reader in with descriptions of his five main characters and their plans to support one another spiritually as they disperse after having bonded in a Bible study group.

As he warns in the preface, Duvall boldly addresses the vagaries of godless living. For example, Shaun, a young boy who is abused by his mother’s numerous boyfriends, begins to make bad decisions and finds himself on a doorstep with the corpse of a young man whose head has been blown off.

The characters are interesting, but their reactions to circumstances and events are sometimes unrealistic, as when a primary character, Samantha, is shot to death on a Sunday afternoon, as she throws herself between her mother, Helen, and a thug who has come deal with Helen’s drug-enslaved, reprobate husband. The next paragraph deals with the regular Sunday evening church service in progress, to which Helen and hubby are “late arrivals.” The reader is left to assume this previously un-churched couple leaves the thugs with their daughter’s lifeless body so they can make the evening service.

Though engaging, the flow of the text is somewhat jerky due to its multiplicity of story lines and shortage of transitions. The text also suffers misuse of commas (used to set off adverbs), over-use of exclamation marks, and some word choice errors, including over-use of the word “suddenly.” However, the message of life-changing hope is clear in the God-ward decisions made by several of the characters, who then reach out to others and bring them into the fold of the church.

Duvall’s ideas and story are well intentioned. Contingent upon the choice of a good editor, he could righteously impact readers with more engaging books to come.