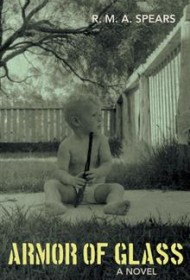 Armor of Glass is a contemporary novel recounting the chaotic life of a man trying to overcome childhood abuse while searching for his purpose in life.

Using a train ride to pause and reflect, main character Brick reviews his entire life and hopes to finally accomplish something of importance. His tale starts with sexual abuse at the hands of his childhood coach and follows him through college, joining then quitting both the Navy and Marines, failing at business and then rejoining the Marines.

During this time, family, career and divorce struggles abound, but one female friend, Cameo, remains his constant love. Their long-awaited affair causes the near destruction of his military career and the complete destruction of hers. As the story unravels, Brick seeks revenge on his childhood coach and learns surprising information about Cameo, among other revelations.

Professionally written, the story has many strengths: It brings readers satisfyingly into the action with its realistic first-person narrative. The characters are layered and believable, delivering convincing dialogue (Brick’s life-long romance with Cameo is a particularly skillful part of the story). The narrative switches smoothly between the flashbacks and present timeline on the train, creating a compelling pace.

Unfortunately, though, the story is marred by the narrator’s excessive anger. The narrative relates every unfortunate thing Brick experiences, from failing at the Air Force Academy to bungling civilian business ventures, and is replete with his grievances and prejudices toward the targets of his anger and defeat. Many readers will feel uncomfortable with the profanity and bigoted attitude expressed. Sadly, Brick doesn’t seem to like anyone or anything, and nothing transforms him; his reflections never lead to the all-important self-realizations readers expect. Additionally, the ending feels overwrought and contrived and is somewhat confusing.

In sum, this novel has an interesting tale to tell and many highlights, but the angry narration combined with the character’s lack of increasing self-awareness is bound to leave some readers dissatisfied.