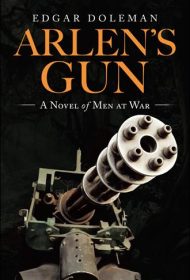 In Edgar Doleman’s absorbing novel Arlen’s Gun, an angry loner from Baltimore begins to discover brotherhood through the trials of Vietnam combat.

Arlen Washington joins the Air Force to avoid the draft during the Vietnam War. But he’s sent to Vietnam anyway, where he’s a gunner in an AC-47 gunship, the aircraft type nicknamed “Puff the Magic Dragon.”

When his plane, code-named “Spooky 45,” is shot down, he has the foresight to disconnect the undamaged minigun from the wreckage. After the survivors manage to connect with an Army unit, Washington takes pride in the gun, a six-barreled beast that can fire over 1,000 rounds per minute, and he fantasizes about bringing it home to the ’hood and mounting it on a Lincoln town car. But a friend mocks him for considering stealing it: “Think it’ll fit in your duffel bag?”

His devotion to and skill with the minigun earn him respect he’s not used to receiving. Spooky 45’s copilot introduces him as “Airman Second Class Arlen Washington, gunner, general pain in the ass, and life-saving master improviser.” As the story evolves, Arlen discovers that he and his comrades need each other and feels the sharp pain of losing fellow soldiers in battle.

This story is told in clear, credible detail, with comparatively little violence initially. Washington is no coward, but in one case he doesn’t immediately respond when his unit is attacked—“the world just needed to go away for a while”—but then the shouting stirs him to action. Tension builds throughout, culminating in a ferocious set-piece battle with “Charlie,” the Viet Cong. Doleman spares readers the gore while still delivering a fast-paced yarn and sense of the horror of warfare.

The author is a two-tour Vietnam veteran and career soldier who shows great empathy for his characters and deep knowledge of his subject. Fans of military fiction will be enthralled with this gripping tribute to the ordinary Americans who fought in Vietnam.