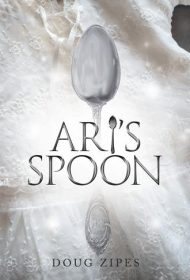 Ari’s Spoon is a historical novel that connects the past with the present.

Surgeon-in-training and Polish Catholic Gabe Goerner discovers an engraved silver spoon sewn into his newborn daughter’s baptismal gown. While trying to find the origins of this mysterious spoon, Gabe comes across the hidden journal of Jakob, a young Jew living in the Warsaw Ghetto during WWII, who joins the Jewish uprising against the Nazi occupiers. Reading this journal leads Gabe to make a momentous choice that affects his relationships with his wife and father-in-law, who is also his supervisor at the hospital.

The novel comes alive in the chapters featuring Jakob, capturing the increasing fear of Warsaw’s Jews as the Nazis quickly strip them of their rights and start the process of trying to exterminate them, casually shooting civilians in the streets. Even as an escapee describes the horrors of the Treblinka death camp, many Polish Jews cannot believe the Nazis plan for genocide.

Jakob’s transformation from young, naïve man to determined, successful fighter and leader is thrilling to watch, with him knowing the odds of survival are low but ready to take as many Nazis with him as he can. The suspense is high throughout, as readers understand there’s a good chance Jakob won’t survive. There are lots of shoot-outs, chases, and fistfights to keep the action going, as well as plenty of blood and sacrifice.

The later chapters, showing Gabe’s life after reading about Jakob’s, feel rushed, as though racing to a conclusion. While there is much discussion between Gabe and his family regarding his eventual, crucial decision, the research he does into making it is more summarized than depicted.

The tension between Gabe and his father-in-law is well developed, although the action related to this conflict towards novel’s end feels melodramatic, more suited to the ghetto scenes than in the present-day.