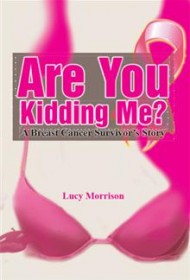 Leave your house any time in October — Breast Cancer Awareness Month — and you will be visually assaulted by pink ribbons. The disease has become disturbingly commonplace. Thus, a memoir from a survivor who is also a medical professional, one that offers a highly specific (and often funny) take on her journey to wellness, has the potential to draw a wide audience.

Are You Kidding Me? is author Lucy Morrison’s reaction to much of the news she gets after being diagnosed. Despite a good prognosis and less invasive cancer that allowed her to have a fairly gentle chemotherapy regimen, there are still hiccups along the way, including an oncologist whose faith in his own judgment left Morrison on an unhelpful medication for much longer than was necessary. It’s hair-raising stuff considering that Morrison, a nurse herself, is better equipped to speak up on her own behalf than most patients, but still runs into problems.

Are You Kidding Me? is a bit slapdash in its writing and organization. Long digressions about Morrison’s fights with her ex-husband and extended riffs on sex with the boyfriend she meets while in treatment cloud things a bit, and her occasional lapses into medical jargon don’t translate clearly to lay readers (for example, she describes her emotions as “labile,” when “unstable” would be much clearer). The book covers roughly five years, but that’s only clear in hindsight; more vivid markers along the way would be welcome.

Those criticisms aside, it’s easy to root for Morrison. She’s a hard working, hard partying “Parrot Head” (follower of Jimmy Buffett) with a raunchy sense of humor. Her love of life jumps off the page here.

Are You Kidding Me? isn’t for everyone, but it may provide a bracing dose of support for anyone faced with the big C.