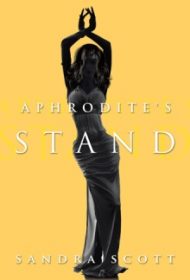 Dr. Andra Theonopilus has taken a leave of absence from her job in internal medicine to meet the Greek family of her new husband, Jayson, face to face for the first time. Although their trip promises the beauty of a Greek villa owned by her husband’s wealthy family, she feels nothing but dread. Her dark suspicions are confirmed when she is faced with Jayson’s brooding, imposing brother, Stefano, who makes it clear that he does not approve of their interracial union. But soon, Andra discovers that she and Stefano are inexplicably attracted to one another.

As the story unfolds, an avalanche of events out of Andra’s control take her, the other characters, and readers on an unforgettable thrill ride. When Andra is kidnapped by a serial killer, it’s a race against time to save her life.

Maintaining a steady pace, author Sandra Scott deftly manages to introduce a host of compelling characters, such as Andra, Jayson, Stefano, Papa George (the brothers’ father), Andra’s sister Racine, femme fatale Sly, and violent Texas businessman Hog. The well-developed and multi-layered characters are brought to life by their own unique personalities and secrets. While Stefano’s failing health and his growing attraction to Andra are featured at the forefront, each character adds to the mix.

Although the characters are a definite strength, it’s the plot that really shines. There is no shortage of jaw-dropping surprises, and the tension, both romantic and action-based, ebbs and flows perfectly. Readers barely have time to catch their breath before a new mystery or thrill takes hold.

Throughout the story, Scott is never afraid to face issues of race and prejudice head-on. Intelligent social commentary adds another layer to the story, without ever interrupting the smooth flow of plot and character development.

Dangerous, provocative, and unpredictable, Aphrodite’s Stand is an excellent read for fans of romantic suspense.