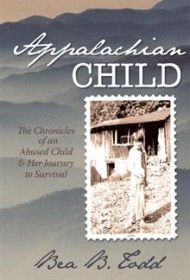 In this well-written memoir, Bea B. Todd documents her childhood growing up with an abusive father who regularly beat his wife and children.

Todd, a pseudonym, recalls being kicked, slapped and whipped almost daily while a child in an impoverished area of the Appalachian Mountains in the 1940s and ’50s. She lived in fear of dying at the hands of her father, who rarely was employed and treated his family more like slaves than loved ones. While their mother worked outside the home to support the family, the children were expected to maintain the family’s small farm while their father did little more than administer beatings and curse them.

Despite her horrific childhood, Todd has chosen to be a survivor. Even though her mother stayed with her father until his death one day short of his 84th birthday, Todd credits her for instilling in her the belief that “You can go anywhere, do anything anyone else can do, and you can be anything you choose to be…Nothing can stop you from being successful.” Todd has written this book in hopes of passing that lesson on to others who were abused as children.

While her story is inspirational, Todd weakens it by going on a bit too long, dedicating four chapters and an epilogue to her various travels as an adult, her love of her country, old family recipes, and other odds and ends. Somehow, a recipe for fried turtle, rabbit or squirrel seems better suited for one of the other books Todd promises to write.

This minor quibble aside, though, Appalachian Child offers a riveting glimpse into another world. The author does a skilled job of sharing her story and gaining the reader’s empathy while not wallowing in what would weigh others down. She even manages a few bright spots in an otherwise bleak tale. In sum, Todd’s Child is worth getting to know.
Also available in hardcover.