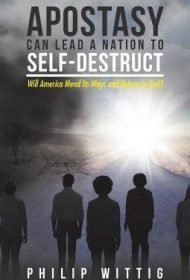 What happens when a whole nation of people turns away from God? This question is at the heart of Phillip Wittig’s intriguing exploration of the decline and fall of Ancient Israel and what he sees as startling parallels happening in contemporary America.

Tracing the development of Israel from God’s first covenant with Abraham to renewed contracts with the likes of Moses, David, and Solomon, Wittig highlights what he sees as simple cause and effect: When Israel kept its agreements with God, it was rewarded with protection and prosperity. When the Hebrews fell into debauchery and idol worship, however, God delivered them into the hands of His enemies, eventually leading to their partial destruction and enslavement.

Wittig sees similarities with the U.S. Citing such examples as the 1962 Supreme Court decision that outlawed prayer in public schools to Roe vs. Wade and the legalization of abortion, the author posits that America has increasingly turned away from God. These rejections eventually led to a series of punishments, including the loss of the Vietnam War and the terror attacks on the Pentagon and World Trade Center. The author contends that God revoked his “hedge of protection” from America and Ancient Israel; destruction by an enemy was then an opportunity to rebuild each nation’s soul.

Well-versed in scripture, Wittig offers a largely compelling read. His arguments are simple, and he details them in a linear and orderly fashion. Although the text could use editing to trim run-on and awkward or repetitive sentences (e.g., “Moses had led the Israelites to the portal of the Promised Land, but God did not allow him to set foot in the Promised Land because Moses had disobeyed His command at a critical time.”), it’s largely an easy read—and an attention getter. While liberals and skeptics will balk at many of Wittig’s ideas, fans of Jonathan Cahn’s The Harbinger and Michael Drosnin’s The Bible Code will find much to like here.