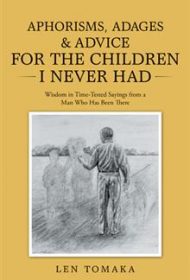 In the preface to his book, author Len Tomaka notes that through the years he has collected various sayings that “relate powerful lessons.” Having never been blessed with children, he now wishes to offer them “to the children and grandchildren I never had.

In this slim volume, he does exactly that. Tomaka offers one idea/saying per page. The entries are organized into four categories (Behavior, Work, People and Tidbits) and give the sort of advice a parent might often impart to a child. For example, in a passage titled “A Reputation Takes Every Minute to Build,” the author advises: “Do not lose your reputation with one indiscretion. That one imprudent act, social or professional, can erase all that you’ve worked to obtain.” Other sample passages are titled “First Impressions,” “Don’t Put All Your Eggs in One Basket,” “Rank Has Its Privilege” and so on.

As such titles indicate, many of the passages offer advice that most readers will have already heard, probably repeatedly.  But occasionally, the author surprises with offbeat practical suggestions, noting, for example, that readers double any estimate on a remodeling project, chew sugarless gum after meals to clean their mouths and use shoe trees to keep their shoes attractive. While these may be helpful thoughts, the shift between practical issues and more lofty ideas lends an uneven feel to the volume.

Adding to the disjointed feeling, some entries simply define the origin of an expression, rather than offer advice. (For instance, on the page titled, “I’m Just Touching Base With You,” Tomaka describes how the term “touching base” came from baseball.)

Despite such drawbacks, the book is nicely laid out and well-edited. Although much of this advice is widely available elsewhere, the author has a reassuring and kind  fatherly voice that might appeal to new college graduates or those starting life over after big changes.