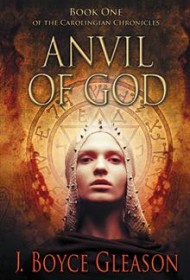 Charles the Hammer has done much to strengthen Francia during his de facto rule. A devout Christian and patron to Bishop Boniface, he has subjugated Bavaria, vanquished the pagan Saxons, and halted the expansion of Islam into Western Europe. But now he is dying, and he has decided to divide Francia between his sons Carloman, Pippin, and his youngest son Gripho, whose mother is the Bavarian princess Sunni. But even before Charles is buried, the scheming begins.

The pagan Gripho defiles a church in his new territory, and Carloman, a fanatical Christian, becomes a pawn for Boniface and the Church’s ambitions. The two are soon pitted against one another in a bloody conflict as their sister Trudi, betrothed to a man for political purposes, attempts to flee to the one she loves — with disastrous consequences.

While there are so many exceptional elements to this novel, character development has to be one of the strongest. The central characters are all extraordinarily layered. Trudi, in particular, is a wonderfully complex figure; she’s a warrioress, courageous, empowered and in many ways the linchpin to the entire kingdom, but also vulnerable and naïve to the machinations around her.

The first installment of Gleason’s Carolingian Chronicles, this debut is a “must-read” for anyone who enjoys historical fiction. A rich and evocative writing style, profound character development, relentless pacing, powerful themes (politics, religion, love, betrayal, etc.), and stunning cover art make this a reading experience that fans of historical fiction will not soon forget. A towering, breathtaking work of fiction.