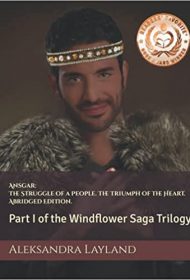 In this abridged version of Ansgar, author Aleksandra Layland imagines a faraway, fantasy world with clear parallels to ours.

The story takes place on the island of Kimbria, colonized long ago by conquerors from a distant supercontinent called Aspatria, with the native population decimated over time – a seeming reflection of the fate of the Americas under Europe’s colonizing forces.

Ansgar is the youngest scion of King Bogumil, the first monarch of the Kimbria kingdom. Each of Bogumil’s four sons has been named a duke to oversee one of Kimbria’s regions, and Ansgar’s territory is the Southlands, the “least desirable” section of the continent for its wild, harsh environment.

En route to his new realm, Ansgar is injured in a shipwreck. During convalescence, he becomes determined to find the native Kimbrii who survived their legacy of conquest and violence: “If he could… understand from them what they needed to preserve their heritage and not die out … wasn’t he doing something worthwhile?”

As Ansgar traverses the Kimbrian wilds, he’s rescued by the Kimbrii and falls in love with Keholani, a tribal leader in a society where women have equality with men. As Ansgar learns more of the Kimbrii’s system of government, spirituality and philosophy, he’s forced to question his own culture and royal family.

According to the foreword, this abridged version of Ansgar includes modifications from earlier drafts. The value of those revisions are clear: The text is clean, and the more detailed explanations of the history of Kimbria and Layland’s elaborate world building balance scenes of human connections and emotion. In particular, Ansgar’s relationship with Keholani is realized with depth and sincerity.

The edits make for a brief tale, however. At less than 200 pages, this version is less an epic fantasy than an introduction to a world the author explores in many follow-up works. This version of Ansgar is still compelling but will leave readers hungry for more.