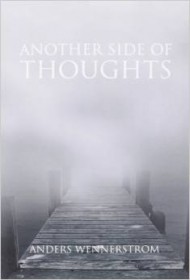 Anders Wennerstrom’s Another Side of Thoughts is an enigmatic book-length poem that meditates on the nature of love, gender identity, and sexual relationships.

Rendered in all capital letters, the poem reveals a thought-provoking narrative early in the book with these lines: “MY FRIEND/ […] SENT ME A MESSAGE/ ABOUT TRANSGENDERED PEOPLE/ IN PAKISTAN,/ […] AND SHE ASKS ME/ TO WRITE SOMETHING FOR THEM.” The speaker later goes on to express his longing for a different world beyond this “FORCEFUL HETEROSEXUALITY/ WHERE WE HAVE PREDESTINED ROLES.”

While intriguing, however, the narrative is under-developed and ultimately dissolves into abstraction. The speaker grows obtuse, and the poetic journey fails to resolve in a satisfying way: “THIS MATERIALISATION/ OF PRESENCE/ FEELING THE TRUE EMOTION/ AND BELONGING/ TRUE RESPECT/ EVEN IF THE MATERIAL SUBSTRATE/ DIFFER PRESENCE WITH DIRECTIONS/ AND NAMES.”

Throughout, the work displays uneven mastery of poetic devices. Some passages contain resonant phrases and compelling images, such as “THE GHOST OF MECHANICAL PEOPLE/TELLING ME/WHO I AM,” the “FUTURE BECOMES/ A WORD FROM OUTSIDE/WITHOUT A SENDER,” and “A HOLLYWOOD CONCEPT/ OF TOUCH.” As with the book’s title, however, other passages are convoluted, confusing, and abstract. For instance: “I STARTED TO INVENT/ THE ONCE SELF-DISGRACEFUL PICTURE/ AFTER THE OTHER IN POEMS/ FULL OF SELF-IRONICAL CONDEMNATION/ WHERE WORDS DID LET ME SEE/ WHERE I HAVE BEEN.”

Another Side of Thoughts holds strong intellectual and thematic promise, but in its current form, much of the speaker’s reflection is unclear and inaccessible to the reader. Frequent typographical, syntactical, and grammatical errors impede the full impact of the text, and the use of all capital letters gives the impression of the speaker screaming at the reader, causing a potentially alienating effect.

In sum, this collection requires more polish in order to be appealing and accessible to a wide audience.