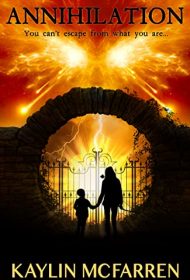 The second installment in Kaylin McFarren’s Gehenna saga (after 2020’s Soul-Seeker) is set largely in the realm of Hell, blending biblical myth, dark fantasy, and erotica.

The story begins with teenager Samara Daemonium attending high school in the realm of Middle Earth—a place where angels and demons exist like humans. Her mother Ariel, a guardian angel living in a demon’s body, and her father Crighton, a soul-seeking demon, grow worried when her former demon boyfriend Legend Hunter is murdered and Samara becomes entangled in a looming conflict called the Red War, prophesized to be the deadliest conflict in biblical history.

Meanwhile in Hell, Lucifer—believed to be dead—returns in the body of Legend and reclaims his throne from Queen Lucinda, who has been increasing her dark power in preparation of the upcoming war. As vindictive and twisted as ever, Lucifer tortures Lucinda—and others who stand in his way.

Obsessed with Samara, Lucifer’s ultimate goal is to have her as his queen for eternity. But others see Samara as the key to defeating Lucifer and his officers. Samara must figure out who she is and her place in the world before she makes a mistake that could destroy countless souls.

The series is comparable in tone and content to Anne Bishop’s sensual Black Jewels saga and Cassie Ryan’s Sisters of Darkness novels. Most of the sex scenes are steamy, and the blending of dark fantasy and erotica is appealing. The story falls down, however, in the gratuitously graphic nature of the sex sequences, many of which contain brutal rape scenes. Additionally, the storyline is bloated in places due to numerous secondary characters and their machinations, and the planes of existence and their interconnectivity—Hell, Earth, Middle Earth, even a planet in the Twelfth Dimension—isn’t as meticulously described and coherent as it could have been.

Despite such issues, the story is dark and decadent, and fans of such fare should find it largely entertaining.