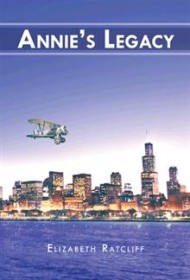 This thin historical romance novel revolves around a young Missouri woman who plans to be a teacher, but finds a different kind of life after meeting a young and handsome pilot while visiting Chicago’s Century of Progress Exposition in 1933.

The reader first glimpses Annie as a mom of three in Chicago in 1954. Her husband, Michael, fails to return home and she fears that something terrible has happened. The story then quickly backtracks to the early 1900s. Annie narrates the entire tale, beginning with a description of her immigrant grandparents, her parents and their farm life.

She also relates what Michael told her of his family life, developing the story to the point of Annie’s and Michael’s chance meeting in Chicago. They eventually marry and raise a family of their own. About 300 pages in, the story reverts back to the opening timeline regarding what has happened to Michael.

This novel is chockfull of characters, but only a handful play key roles in the plot. Mostly, the story feels more like a memoir detailing standard family hardships and small victories, rather than a gripping tale you can’t put down.

Elizabeth Ratcliff provides numerous historic mentions, from Lindbergh’s flight across the Atlantic to innovations of stoves, refrigerators and washing machines to Guy Lombardo playing on New Year’s at the Roosevelt Hotel. But rarely are such events key to the actual story. They are generally told as asides to mark the time period and not vividly applied to the plot. Poor punctuation also is a drag on the text.

Overall, while Ratcliff has the seed of an idea, this slight novel requires a revision paring down the characters and providing a more active and scintillating plot in order to appeal to a large audience.