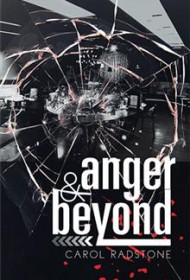 Anger & Beyond is a crime novel that sweeps across continents as a woman flees from her controlling partner, a detective with London’s police department.

Gerry and Richard once were a passionate couple, but Richard’s controlling tendencies have overwhelmed Gerry once and for all. She flees from their home, seeking shelter with friends, afraid of the person Richard has become due to his drinking habits. Richard follows Gerry, but his search for her becomes complicated by a case he’s working, and he must make some hard realizations about his life along the way.

Author Carol Radstone delivers an interesting novel, even if it’s difficult to get a fix on the genre, which seems to be a mix of women’s contemporary fiction, mystery and thriller. While there are several different plot threads, and the narration switches between Gerry and Richard, the author skillfully balances the competing storylines, slowly drawing them together. The characters of Gerry and Richard are well-developed, and readers feel sympathetic towards Richard, in spite of his actions.

In addition to these strengths, Radstone offers vivid descriptions as Gerry and Richard travel to exotic and interesting locales. Setting is an important part of this novel, and it’s clear that Radstone paid attention to the details.

One aspect of the writing slows down the story, however: There is too much telling, rather than showing. For example, the author writes: “The two of them adored each other and found it difficult not to want to touch each other whenever they were together, but then the demanding and controlling behaviour on Richard’s part continued into all areas of their life together.” Such ideas would have been more effective if Radstone had shown the two characters engaged in this kind of behavior, rather than simply summarizing the situation.

Despite the abovementioned flaws, the book offers many pleasures. Those who enjoy crime novels and character-driven stories, will find this a generally entertaining read.