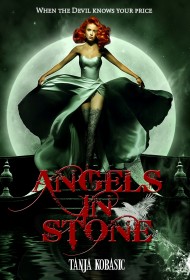 A fascinating fusion of occult-powered fantasy and existential horror, this novel — the first installment in a projected five-book series — revolves around a desperate woman’s attempt to save her marriage by enlisting the help of a voodoo priestess and her harrowing journey of self-discovery that follows.

The narrative of 43-year old Manhattan realtor Claire Preston-Lockwood, however, is just the tip of a much larger and thematically deeper storyline. Preston-Lockwood’s failed attempts to get pregnant and give her much younger husband the family he longs for lead her to visit Esperança, an enigmatic voodoo priestess living in the Bronx with a penchant for cannabis and hard liquor. The elderly woman, who is seemingly a follower of Lucifer, introduces the cynical real estate agent to “the dark world” of demonic magic and satanic rituals. Mesmerized by the priestess’ insight and power, Preston-Lockwood quickly agrees to do whatever it takes to become pregnant. Her decision to essentially embrace Satan is made easier because of her tragic past: her beloved mother was killed in a car accident when she was just a child, and she has hated God ever since.

Preston-Lockwood eventually finds out, though, that she is just a pawn in a millennia-long war between the forces of good and evil and that the world and all of its inhabitants are on the “cusp of Armageddon.” She must come to grips with her tortured past and ultimately decide which side she is on.

Adeptly written and replete with dark imagery and symbolism, this page-turner of a novel continually develops and surprises. What begins tonally as a Rosemary’s Baby (by Ira Levin) kind of read, burgeons into a richer, more nuanced story by utilizing elements of contemporary fantasy, apocalyptic fiction, and Christian mythology.

While the overarching storyline isn’t exactly innovative, readers who enjoy narratives that explore the conflict between good and evil will find this novel — and its damaged heroine — simultaneously spellbinding and soul-rending.