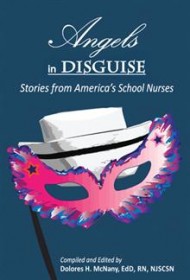 The public is largely unfamiliar with what school nurses do today. The job has changed so much over the last decade that even parents who are themselves not that many years removed from school are often unaware.

There are, of course, the traditional duties: teaching, tending to injuries, dealing with that all-encompassing malady, the stomachache. But with the changing economy, school nurses have become the front line of health care because parents often can’t afford to visit the doctor or miss work. And because of recent efforts to keep children with health challenges in the general school population, school nurses have had to step up their game.

Anyone wanting a better understanding of the breadth of a school nurse’s job should read Dolores H. McNany’s Angels in Disguise: Stories from America’s School Nurses.

McNany, who spent 23 years as a school nurse, has compiled letters from nearly 60 school nurses from around the country, each answering her question: what do school nurses do? In their brief responses – most essays are just a page or two – we read about treating bumps and bruises, of course, but also how school nurses became the leaders in emergency response at Columbine; how a nurse can be responsible for up to 4,000 students; how being a school nurse in Alaska has its own set of (sometimes amusing) challenges.

The book is succinctly written and well edited – though McNany says in the acknowledgments that “numerous stories were edited or eliminated in order to contain only the core facts and to protect confidentiality.” Doing so may have taken some spark out of the nurses’ responses.

Even so, anyone who has ever worked as a school nurse will appreciate Angels in Disguise. The book can also serve to educate someone considering working in the field and offer parents and school administrators a fuller picture of life in the school nurse’s office.