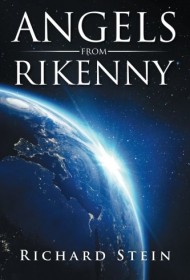 Angels from Rikenny takes readers on a quirky meta-narrative of a film-within-a-film-within-a-fantasy, where the truth blends playfully with the edges of hallucination.

Protagonist Richard Dinsmore has two remarkable qualities that form the backbone of Angels from Rikenny. First, he is a scientific prodigy, the most brilliant physicist on Earth. Second, he is a paranoid schizophrenic who believes that he has travelled back in time to save humankind from a dystopian future at the hands of the alien Rikennians and their gorgeous leader Noraa, whom he recalls with bittersweet affection as his (future) late wife.

Naturally, no one believes Dinsmore, but the truth isn’t relevant to Brian Brandenburg, a student of Dinsmore’s with an ample trust fund and an entrepreneurial streak. With the help of his cousin (a marketing genius) and a big Hollywood director, Brandenburg sells the idea of making a blockbuster movie out of Dinsmore’s apparent delusions while simultaneously convincing Dinsmore that it will fulfill his mission to save humanity.

If Angels of Rikenny sounds silly, it is. It doesn’t demand we take it seriously, and yet at every turn it manages to surprise the reader with deep insight into contemporary American culture and universal human nature. It asks big questions: How long should we live? What do we owe the next generation? Why are we always in political gridlock? Is it futile to try to change the future? And it does all of that without ever seeming self-important.

Author Richard Stein has created a memorable novel, occupying the same space as works from Douglas Adams, or Kurt Vonnegut (which should serve as a guide for who this novel is really for). Stein is not a literary master on the same scale, but Angels from Rikenny is nonetheless a worthy read, full of imagination, provocative ideas, and surprising twists.